Peptides are proteins broken down by enzymes through a bio-process where the long chains of proteins are broken down into smaller chains. These small chains are called peptides. It is like that the proteins have gone through a digestive process outside the body. Thus, this type of protein can be easily absorbed in the intestines and that do not stress your digestion system.  Short-chain fish peptides have been shown in several studies to reduce blood glucose levels after meals, reduce fasting blood sugar, lower cholesterol and improve insulin functions.

In a doble blind placebo controlled study (4) conducted by researchers at University of Bergen at Norway´s Haukeland Hospital, participants who ate fish peptides showed a 10% reduction in blood sugar 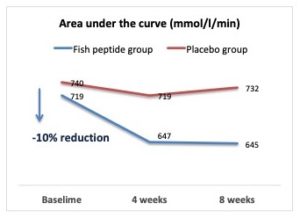 The bioactive fish peptides in Glucolesterol contain naturally occurring minerals and trace minerals such as iodine, selenium, zinc and magnesium. These are important in maintaining normal blood sugar levels and many of the body’s normal metabolic functions.

Chromium helps maintain normal blood sugar levels according to EFSA (European Food Safety Authority). Glucolesterol contains sufficient chromium in order to bear such a health claim. By taking 2 tablets 3 times a day, you get enough chromium from Glucolesterol so that it works positively on your blood sugar.

ALLERGENICITY: The product contains fish protein and should be used with caution by people suffering from allergies to these substances.

WARNINGS: Nutritional supplement should not be used as a substitute for a varied diet. It is important to maintain a varied and balanced diet and a health life style. There are many risk factors for heart diseases. Improvement in one of the factors can, but may not, have a positive effect on the conditions. The product is not intended for diagnosis, treatment, cure or prevent any disease. Pregnant women should consult physicians or dieticians before use.